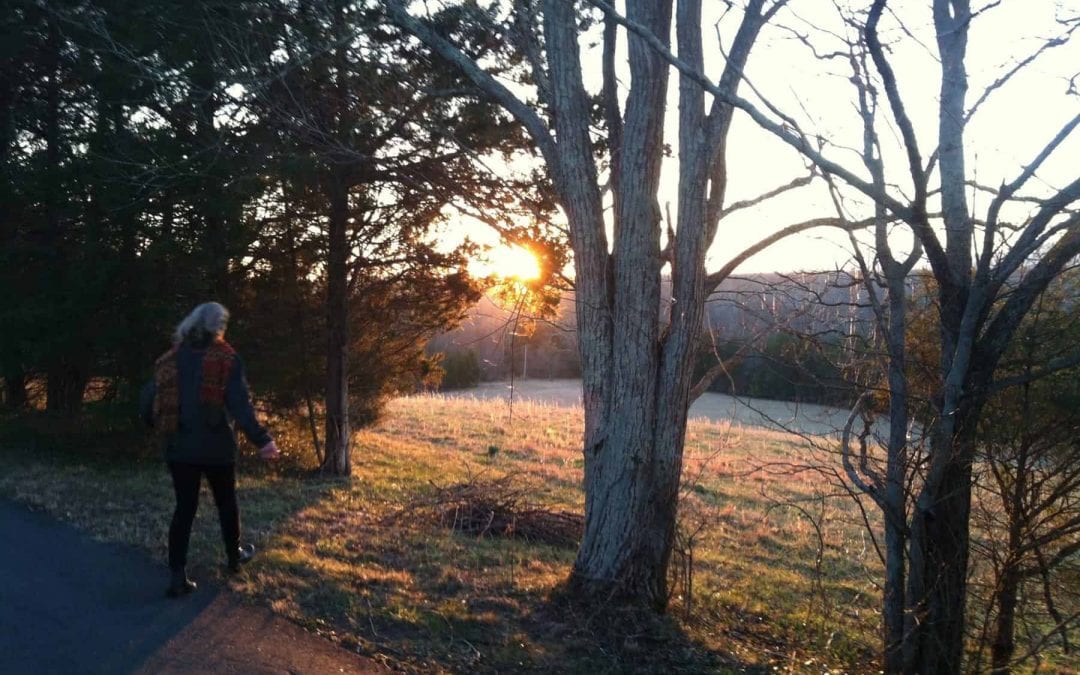 My husband and I bought a piece of land two years ago, built a house, and moved in last year. Shortly after we arrived, I felt the presence of someone watching me. I wasn’t afraid, really, but I heard disturbing noises downstairs and frequently was awakened in the middle of the night with an urgency that felt like someone was communicating, we have to tell you something. As this continued, my daughter refused to sleep in her room because she was frightened. In essence, I was exhausted! I didn’t feel settled in the house.

I called Maggie and arranged for her to come to the land.  After walking around and getting a clear sense that something indeed was present, we sat on the couch and she was guided to listen intuitively to honor the call I heard in the night. Maggie began by sending the message that we came in peace and immediately saw the face of a Native American leader who seemed to have the ability to be present with the many souls that were present on the land as well as communicate with her.  The first words he spoke were, You realize you’re trespassing, don’t you?  He was filled with anger, pain, and fury, and Maggie could see that he demanded a witness to what had occurred on the land but had had none. It felt essential to see and acknowledge the events for any type of healing to take place. She described that he took her spirit face in his hands so she could a scene where not only women, children and braves were massacred but also white settlers that were trying to help the Indians.

Tears were coming down my face as she shared this and we both got a sense that I was a white settler in that lifetime.  After this witnessing’ his demeanor greatly relaxed and he began to explain that it was essential for this to be known for those who died were not buried with honor and because of this their souls could not move on.

He then shared what was to be done to honor these souls and open a door for them to be free.  He gave the following instructions. First, that my family needs to be aware that we are in a sense sharing this land for a time. We are to welcome their presence rather than fear it. We also are to get a piece of white cloth and choose a tree to tie it on.  This is a signal to all the souls that we do indeed come in peace. In addition, we are to place a quartz crystal underneath the back porch.  It is essential that these souls feel comfortable and safe again on a land that was once theirs before they move on. Finally we are to collect some oak leaves and and put four acorns in each leaf and fold it in a particular manner.  We are then to wrap the oak leaf with a long piece of grass and place these packages at various places in the woods around the house.

Then an extraordinary thing happened. Maggie saw that this Native American brought his consciousness somehow to the time before the Europeans arrived and felt once again the life they had lost. He then brought his awareness to the present time in 2016 and looked around with a deeply wise look on his face and said, All things change. I will show this to my people. We both knew then that there would be a healing for these souls and for the land.

I asked about my daughter and her inability to sleep in her room.  A depth of wisdom came forth.  He began to explain that when the furniture was last moved in her room, it was moved in fear.  I gasped because we had moved the bed so she could see our bedroom through the hallway.  He said the signature of fear was still in the room and it was necessary to change the furniture around from this new perspective.  Then he taught that every action we do leaves a kind of energy signature and to be mindful of that.

I feel very supported and validated by Maggie and the work she does at her center. The experience was amazing and my family and I can be on the land in a new way.  We placed the crystals and will do the oak leaf offerings in the fall as was asked. I have left the chair facing out into the woods on the back porch to give whomever a place to sit and in my mind, it is the Native American Chief with whom we communicated. Chris , my husband, and I found a long piece of white material. I walked outside and let myself be drawn to a particular tree that was to the far right the house. As I approached it, Chris told me that was the tree he uses for target practice. He shot at it repeatedly and as I got closer, I noticed it was damaged. The bark had come off in some spots and it was shorn in other areas. I knew immediately that was the tree. I tied the white cloth around and just placed my hands on it and just repeated “we honor you and thank you. What was once broken can be mended”. Chris will never shoot at that tree ever again.

Our experience was really life-changing. After that communication, my entire afternoon was full of light and the most beautiful energy I’ve felt in quite some time. My property feels entirely different to me. It is not as heavy or dark but more spirited . The aura of historical integrity and substance is still so present. What has been interesting, but not surprising, is that since we met I have not been hearing any messages at 3 am about hunger, or starving or please hear us out..we have something to share. I have heard a voice say, Emily..rest.”